I'm a marketing and sales professional and independent filmmaker.

I'm currently launching a hands-on film production academy to cultivate a local film crew for artistic and commercial projects. I had the opportunity to learn how to shoot, edit and manage film projects with several friends that worked in the New York City independent film industry. The inspiration for the academy came from my past involvement in film production and acting. Something magical happens when you pull a group of people together to make a film. I have witnessed friends, colleagues and complete strangers working harmoniously as a team, while any friction and challenges we often see in group endeavors were either non-existent or fell away quickly if ignited. Most everyone loves movies, and for those that get to have a hand in producing one, the rewards can be many.

I believe that effective vocational rehabilitation that employ pursuits that focus on creative expression can help individuals find purpose, joy and meaning in their lives, as well as potentially be instrumental in recovery from various traumas and addictions.

In 1969, two years after my birth, my parents and I immigrated from Communist Czechoslovakia to the United States. In the 70's and 80's, I spent most of my youth across the Hudson River from Manhattan, in the rough-and-tumble blue-collar havens of Jersey City and Bayonne, New Jersey. 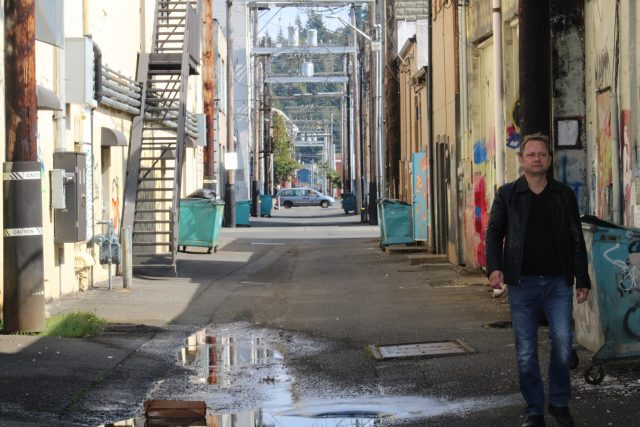 I credit my business pursuits, that began at age 19, as one of my major saving graces. I was too restless for college and perhaps too much of a non-conformist for the military.

In 1987 vertical blinds were all the rave. Housewives were buying them up like hotcakes. My father decided to get into the window covering business with a friends of the family. They hired me to install custom blinds and shades, and I soon learned how to also sell them through the company's shop at home service.

At age 16, I earned an hourly wage and commission selling newspaper subscriptions door to door for The Bergen Record in Hackensack, New Jersey, and because of that experience, I possessed the confidence to quickly become proficient at selling window coverings with a bit of training.

Six months after getting hired by my father's fledgling company, I started my own window covering business, at first, on a part-time basis. A year later at age 20, it became a full-time endeavor, and I was making more money than I would have with a college degree and a full-time job in corporate America. Being in command of how much money I could earn greatly appealed to me.

I first employed very basic marketing in 1987. I had no budget for advertising, so I created many handwritten flyers with tear-off tabs with my phone number. I posted them near the exit doors of every supermarket within a 20-mile radius. I also did this at hi-rise apartment buildings after figuring out how to get past security personnel. After making a few initial sales in my new endeavor, I simply mimicked what my father's partner did to generate more business—I ran print ads in the Sunday paper. Back then, the newspaper and the Yellow Pages were the only game in town. There was no Internet. It's much easier to start a new business venture today. Anyone with some savvy and an eagerness to learn can figure out how to promote themselves online.

Six years after I closed my window coverings business due to market saturation and a downturn in the economy, I launched a successful pest control company in Bergen County, New Jersey. That year I also built and maintained one of the first small business websites in the pest control industry. In 1998, after learning how to build basic websites and generating and directing traffic (visitors) to those websites, I began earning revenue from online affiliate programs. I later leased a warehouse and built an ecommerce website that sold specialty and vintage foreign films in VHS and DVD formats to retail customers globally. I later sold my share of both ventures to my business partners. Learning how to effectively sell products and services online proved to be very valuable and lucrative for all my past and future ventures.

Several years later in 2004, I married into the restaurant business and through effective marketing and management enjoyed 10 years of success in what many label the toughest business of them all. My now former wife and I sold our restaurant in 2015. In 2012 we purchased a franchise, the Northern New Jersey edition of Natural Awakenings Magazine, the premiere alternative health magazine in America. We published this monthly print and digital magazine for over 7 years.

We sold the magazine franchise in January of 2020, which was blessing. Distribution of the magazine was dependent on local businesses being open. Through a series of events, in April of 2020, I decided not to renew my apartment lease, sell my possessions and pack up my clothes, computers, printer and several boxes of memorabilia and relocate from New Jersey to coastal Los Angeles county. Not long after my arrival, everything seemed to disconnect and it was beginning to appear likely that I did not come to LA to stay, but instead to be redirected to a place where I could "heal" from the fast, toxic city pace I was in for many years. I had a dear friend with an empty house in Grays Harbor County, Washington. She suggested that I stay there for a while to regroup. The slower-paced, enchanting environment of the Washington coast soon began to grow on me and I decided to remain and move forward on launching my marketing company. Stay tuned...

Click Here to stay connected and get the best of what I have to offer.